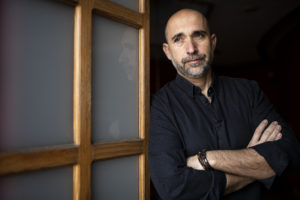 “Ginés has the perfect combination of brain and heart.“

“This man conducts jazz very well. He feels, knows the style, the history…”

He is also a professor with tenure in the Professional Conservatory in Cartagena.

In 2006 Ginés received the “Young Murcian of the Year” prize awarded by the Youth Institute and the Council of Presidency of the Autonomous Community of Murcia for his musical and artistic career.

He won his first composition award at 13 years of age, in the “Young Stars of the Region of Murcia” competition, with the piece “Campos de mi tierra” (Fields of my Land) and lyrics from the poet Jerónimo Gea.

He won First prize in composition in the International Competition “Villa de Benidorm 2010″ with the piece “Yasmina”.

He has 1 Gold medal in the Global Music Awards and 6 silver medals.

He won the First Prize in Spain in the First Maurice Ravel International Composition Competition in the orchestra category.

He has published the book “Theory and Practise of Modern Music“.

He has realised the following arrangement and composition projects:

“Trompa Flamenca” and “Bésame mucho en latin jazz”, requested by the international horn soloist Paco Rodríguez. The pieces were first performed in New York and played on his tour of Asia and South America. Published by Brotons&Mercandal.

A request from the international trumpet soloist Luis González Martí, the piece “Concert for trumpet” for wind band and trumpet. Gold Medal in the Global Music Awards.

Requested by the violinist Rezart Kapetani the piece “Capricho Árabe”.

Arrangements for the group Vetusta Morla and the OSRM.

Orchestration of the feature film “Cartagonova” nominated for a Goya award.

String arrangement for Abdón Alcaráz in “Gitana”, Gold Vein Award in the 50th Mine Singing Festival of La Unión.

Transcription (four hands) of the four notebooks of I. Albéniz’s “Iberia” suite for the duet Valero-Rodríguez, performed in Spain, France, Italy and Belgium.

Composition, arrangements and trumpeter in the GMV Big Band.

Arrangements for the 100 years Piazzolla tribute with WDR Funkhausorchester

We use cookies on our website to give you the most relevant experience by remembering your preferences and repeat visits. By clicking “Accept”, you consent to the use of ALL the cookies.
Cookie settingsACCEPT
Manage consent

This website uses cookies to improve your experience while you navigate through the website. Out of these, the cookies that are categorized as necessary are stored on your browser as they are essential for the working of basic functionalities of the website. We also use third-party cookies that help us analyze and understand how you use this website. These cookies will be stored in your browser only with your consent. You also have the option to opt-out of these cookies. But opting out of some of these cookies may affect your browsing experience.
Necessary Always Enabled

Any cookies that may not be particularly necessary for the website to function and is used specifically to collect user personal data via analytics, ads, other embedded contents are termed as non-necessary cookies. It is mandatory to procure user consent prior to running these cookies on your website.